The Beasts of Eden: Two Monsters From Before the Fall

Of that forbidden tree, whose mortal taste

Brought death into the world, and all our woe,

With loss of Eden — Milton

Art by Hedrick Gericke
The Last of the Holy Apes
Thick columns of creamy crystal; the black apes curl at their centers, fetal and frozen. A halo encircles each head, its red light pallid, delicate as blood diffusing into milk. The crystals hang heavy, held perfectly in place by some force, invisible and unfailable. All is still, the air stirred only by the motion of smaller prisms in slow orbit around each pillar.
They are the last of the Holy Apes. Antediluvian, edenic minds foresaw the fall, the descent of man from divine genius-beast to naked babe, profaned, useless, soft and squalid. The crystals hide them from the hours, keeps them from the millions of minutes eager to claim their due.
Removed from moment and matter, they have mastered light: they are seen only when and as they wish, carefully crafting their image as light falls through their crystalline forms.  They gather light greedily, sending forth their fractal prisms, which feast upon the fabulous panoramas of far places, transmitting each image through crystal networks to the corners of the earth where the ape's preservation-prisons hover.
There, they hoard their looted light, poring over every picture, interrogating each image until their gaze can glean no more from it. Sightseer-thieves find only blinding death, as the apes steal the sunlight from their eyes, sun-warmth from their skin, pierce them with laser-bright lances.
Self righteous spies, vicious voyeurs, the preeminent armchair experts, the apes have long ago abandoned art and enterprise. Their crystal sanctuaries are saturated with light from a sun whose warmth they can't recall, painted with ethereal photographs of their progeny, whose little lives infatuate and infuriate them. The essence of the creator lives on in the apes, waits, and withers, while outside, creation carries on, channeled through the forms of their abandoned children. 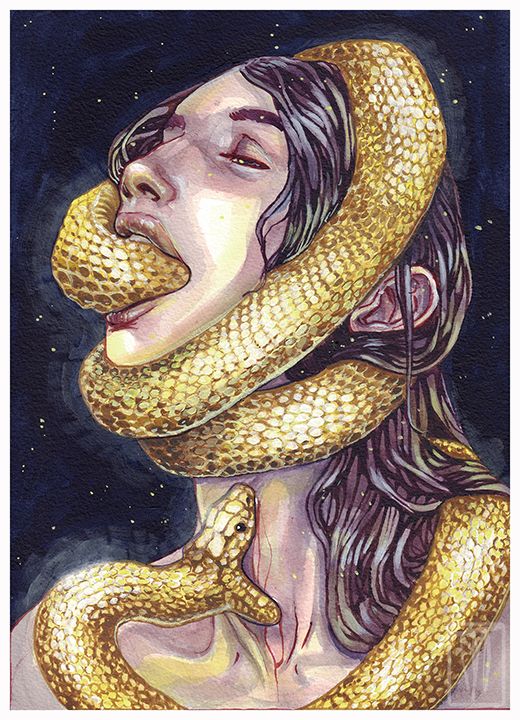 Art by Myriam Tillson
What Became of the Serpent?
The crawling things were not created; no careful hand shaped these spiral minds. Crawling from the cracks in creation, uncared for by the maker, the spiteful serpents brought low the beasts of eden, begot man's age of idiocy.
They couldn't get away with it: the last of the Holy Apes hunted them, crystal cages stocked with captured sunlight, probing beams of brutal radiance that seared the serpent's even through their scales. They fled, squirming deeper into the formless foundations of the created world. There, they lingered, lurking for countless coiling centuries, sliding silently through the secret seams that wind and bend like rivers through the stone. All the wealth of the world is known to them, all treasures undiscovered by the eyes of the divine.
It is they who whisper rumors of these riches, inflame the minds of men with dreams of distant diamonds, set in stygian stone like stars. And when the foolish follow those fantasies, the serpents find them. Their poison paralyzes the body, holds the human host long enough for an egg to slide down the esophagus and settle in the stomach, long enough for the gut-birth, the snake's coils entangling with intestine, its head searching upwards, up the throat, and out the mouth, where it lolls, terrible and swollen, like an engorged, intelligent tongue.
The host does not die, no matter how fiercely this frantic wish may burn in their brain. They will be the serpent's hands, long kept from them, a cruel reminder of their place outside creation.  They will be makers and menders, enslaved sculptors, blind builders. The snakes serve as their senses, sharp spines rattling as they test the air, driving their dejected palanquins through the labyrinths of the lower realms.
They are rebuilding the world down there. Stolen hands carve out familiar canyons and cliffs, bedrooms and ballrooms, roads and rivers, courtrooms and dungeons, struggling in sofficating shadow to remake half remembered lands known in brighter lives.
The serpents will not rest until their stygian realm reflects our own, a perfect mirror where they at last can rest, satisfied that there is nothing denied to them that they could not take for themselves.


A Brief Afterword: I was trying to get back into posting on this blog, but some of the responses (both in the post comments and elsewhere) to my last post were inane and pedantic to the point of putting me off for a while. (Shout out to the people who defended my point by the way; y'all got real intense about it but who am I to tell you how to express your passions :p). This is not to say I don't want people to engage with or criticize what I write, I love that shit. Rather, let this be a friendly reminder that:
If my post has a disclaimer saying that I don't care about the general discourse surrounding a subject and offers a definition for a word/phrase that I consistently use throughout the rest of the piece, any counterpoint that can be boiled down to "you used word/phrase wrong" is one that I will be treating as in bad faith and will likely just throw in the garbage.
Labels: Monsters Prose