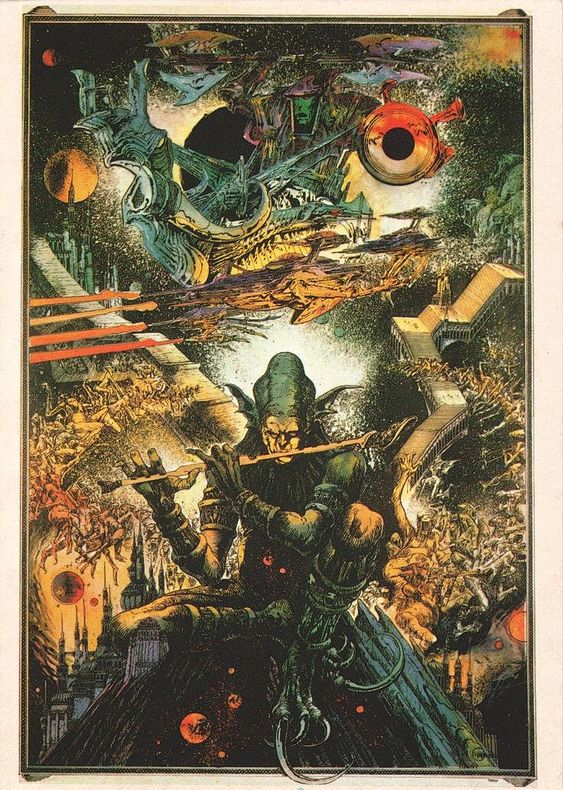 Art By Philippe Druillet
Same old same old; still having a horribly difficult time getting through life, (physical illness, mental illness, just have to snag the elusive spiritual illness and I'll have a full set) but I figured I might as well put stuff on the blog again. For a while, the stress of feeling like I needed to produce complete content lead me to decide the blog was more trouble than it was worth and so I started putting more stuff on twitter, but in the end all that taught me was that twitter is terrible and I should just let myself post less complete polished stuff on here. So here we go; a rather short and scrappy thing that I've been thinking about with regards to system:

Your System Isn't the Game

Now this isn't anything original; in fact, one of the reasons I still consider myself OSR adjacent at all is that the OSR scene has this idea as one of its central underpinnings, so I won't waste too much time talking about it here. Essentially though, the concept boils down to the understanding that the game is what occurs at the table or wherever, between your friends, as you actually play it, rather than being the thing that lives in the book, which is the system. In my head I liken it to fire; the game, like fire, is a process, which uses the system as fuel to perpetuate itself.

This idea runs counter to another pretty popular one: "System Matters." I really don't care about the discourse surrounding this phrase (there's a reason I decided to start posting here again instead of twitter), but because of the topic it seems inevitable that it will be brought up. The idea of "System Matters" in its purest form is essentially the opposite of what I'm arguing; it's the claim that the system determines the experience at the table, and that because of this, the choice of system is the most important decision one can make about running or playing a ttrpg. In less strict forms, it serves merely as a reminder that whatever system you choose will inform the sort of game that you play. There's a few things that bug me about "System Matters," and more than a few things that bug me about its hardcore adherents, but for the purposes of this little treatise or whatever the fuck this is, let me just say that I also accept a lot of the basic ideas that this rather loaded phrase brings to the table.

Your system will influence your game. There's no question; it will influence it in one way or another, whether that way is meaningful or not. However, it's still not the game;  no game is 100% true to its system. Changes are made to the rules on the fly, as people forget stuff and decide it's too much of a pain to look it up, or someone misunderstands a rule, or the GM adjusts something that doesn't sit right, or makes a ruling to cover a gap in the rules, or tweaks something to better fit in line with the narrative: no matter why you play ttrpgs, no matter what you enjoy about them and no matter how wrong I think you are or you think I am, it's impossible that your system will determine every outcome and eventuality in your game. You and your friends are the ultimate source of the "game" process; without you, the system is inert and lifeless.

Now, some designers understand this, others, not so much; the fact that "rulings over rules" is the OSR mantra speaks to why I tend to prefer the designers (well, some of the designers) working in this space.

So far, so obvious. The stuff above, as I said, is nothing revolutionary; a lot of people already know this, whether intuitively or intellectually, and pretty much everyone I play games with on a regular basis is on this same page. There's endless blog posts and reddit posts and twitter threads dealing with that subject. What I think there's less of though, is advice about what to do with this information, how to adjust your thinking in some tangible way that lets you make full use of this understanding that you have. Because I don't know how it works for you, but for me, it matters 0% if I know something if I can't find a way to fold that information into some shape that I feel comfortable handling. Here's what I've come up with:

Your System is Another Player

Imagine your system is another player. Not like, literally, unless you desperately need to anthropomorphize Troika as a sick airbrushed van wizard (and like, who doesn't need that). But by this I mean, get used to thinking about your system like another player: an active participant in the game for sure, but one who, ultimately, doesn't get to run things on their own. Your system should offer input, a few good ideas, maybe some surprises, and then shut up and pass the spotlight to another player.

"But Jones, the system determines what the game is about! The genre! The themes! We gotta listen to it!"

To an extent, sure. But take a moment and think about how nobody, and I mean nobody, has ever run a 100% true to genre game. Like I run modern horror games, and I think I run pretty good ones. I also run melancholic fantasy games, and psychedelic sci fi games, and in each of those games, things deviate! Players don't wanna do the same thing all the time, I don't wanna do the same thing all the time, people crack jokes, make references, etc. None of that is bad; it doesn't ruin your horror game if people laugh, and the sooner you realize that, the more fun you're going to have. The main reason this isn't a bad thing is because not everyone wants the same thing and they don't all want it at the same time.

Some players love being able to indulge in goofy, gory, cinematic violence, others want to work through some shit from their home lives, others want to find a dog and name it something funny, and all of those things should be possible in any game you run because just like the person who wants to find a dog should know to shut up about finding a dog while everyone else is having fun indulging in B movie violence, the system shouldn't be allowed to dominate the discussion of what the game is about either.

Now, any system can be treated this way, more or less, but I think a good question to ask yourself when picking up a new system or, hopefully, designing your own, is this: "is this system going to be an obstinate blowhard attention hog who has to be wrangled and talked down by the rest of the table and, if yes, why???”

To be clear, sometimes there are good reasons why. Sometimes a system just does one or two things perfectly, and if everyone wants to do those things, you'll have a great time. Personally, I find those games are best suited for one shots or 3-4 session micro-campaigns, but your mileage, as always, may vary.

There's a bunch of different ways to approach this same concept; for example, just focusing on economy of design in your systems will land you in a similar boat, but for some reason the idea of the system being a player - not the most important player, but a player nonetheless - has stuck with me and helped me approach my own design and game-mastering.

Because if I come up with, say, a neat panic mechanic for a horror system, I can imagine that as a good suggestion from a helpful player about how to handle a specific circumstance. But then, if reading through what I've written I realize that like... the system has already suggested like 4 other things about similar circumstances, it might be time for the system to shut up and trust that the rest of the players get the idea, and they can work it out from there.

This has another benefit, which is just as a good idea from a player will inspire other good ideas from other players (GM included), a good idea from your system is going to inspire your players as well. A really well constructed mechanic can get everyone on the same page, excited about what's happening, and eager to offer their own two cents, and that's the game process at work.